Fergus Riordan was a childhood movie star, but now he is more at home behind the camera.

Now his creativity is taking him in other directions – particularly photography, but with a philosophical interest in other fields too, and in questioning the partitions we put up between the various artistic disciplines.

This is an area he explores through his FJR Project, and which I spoke to him about, just after he had completed his dissertation in Photography.

Can you tell me about your background in film and how you got into it? I know you were in one of the Ghost Rider movies as a boy. How was that experience, and why didn’t you pursue a Hollywood career?

FR: I began acting young and continued to perform in theatre and film until I did my last film, Don’t Grow Up, at the age of 16. Ironically, I think the seed that put an end to my acting career was sown during my first role as a protagonist. Christian Molina, the director of I Want to be a Soldier, took me under his wing to a great degree while shooting, giving me insight into his thought process and how these thoughts were manifesting visually – I think I spent almost as much time behind the monitor as I did in front of the camera.

That, coupled with my great admiration for the wonderful Juan Carlos Lausin, the DOP [director of photography], led my interest to the work going on behind the camera, as opposed to in front of it. Since then, as an actor, I always felt that I had been involved in projects too late – I wanted to shape them, change them, and have my thoughts reflected in the final product. As an actor my ability to influence films was limited – which is borderline ridiculous, of course. Really, what I wanted was to influence the film in other ways. All that said, there are few crafts that I value as much as that of actors – it’s simply not my own at this stage.

You’ve been working on a dissertation: what are you studying and where? And what’s the dissertation about? Where are you based, by the way? Spain or UK or elsewhere? 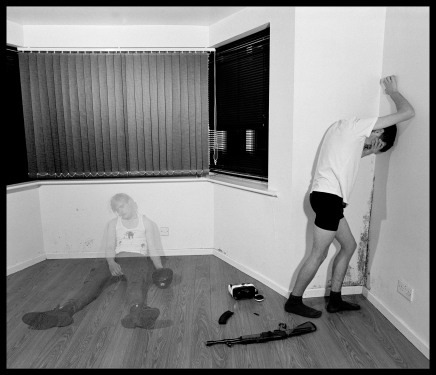 VR project – title Is This Blood

FR: I’m currently reading Photography at Leeds Arts University, but will be returning to Madrid semi-permanently in May [2019]. The topic of my dissertation – which I have just completed [January 2019] – was the result of an ongoing strand of work: it began on the overlap between film and photography theories, with particular focus on what I referred to as ‘summative illusions’. My thought process ultimately led me to a subject I had not previously paid much heed to: virtual reality. The connection is the idea that, as film built on the illusions of photography, VR has built on the illusions of film. The dissertation, in its final form, uses phenomenology and Baudrillard’s hyperreality to examine VR, seeking to establish a foundation upon which readers can formulate an educated opinion on the ethical implications of the technology.

FR: That sounds fascinating, and it seems to relate to your ideas, that I read about on the web, about the partitions between art forms. Can you expand on that a bit?

FR: This breaking down of the segregation between arts is an ongoing exploration of mine, and one that I do not take lightly. I believe that it is not without good reason that most art is confined to a single medium – it is difficult enough to create work within one medium and control its meaning. Including another raises a whole plethora of new questions – suddenly, you may be making comments on the inherent properties ot each medium and its limitations, and the dialogue that exists between the two. In other words: it needs to be done, but well and for the right reasons. My reason is the discrepancy between my primary mediums – photography and film – and my most revered: literature. My father is a philosopher, so words have always been important in our household. And now, encountering little encouragement and few outlets for synthesizing my treasured mediums in the environments I frequent, I’m anxious to break these divisions in my own way.

What’s the idea behind the FJR Project? I guess it’s a showcase for your work, but it seems more than that. Will it grow and change over time? Does the ‘Project’ exist beyond the website?

FR: I’d be lying if I said that there was a well versed rationale behind the creation of the FJR Project at its inception, but its use has become clearer over time. I think its partially related to the divisions between art forms – I wanted a way of incorporating all the work I may create under one banner, be it film, photography, poetry, journalism, etc. But also, although it relates to my name, it detaches itself from my person to some degree. Almost in the sense of a production company, it recognises that I’m not necessarily the only person behind it – every piece of work I do involves others, as actors, co-directors, soundtrack artists, or simply people who inspire me.

That reminds me of jazz musicians, who might add ‘Project’ or ‘Quartet’ or whatever after their name. It recognises them as the creative focus, but acknowledges the others involved. Thinking of photography in particular, what do think makes a good photo, and what do you like to photograph?

FR: Recently I’ve spent some time looking into what I want from a film, generating as a 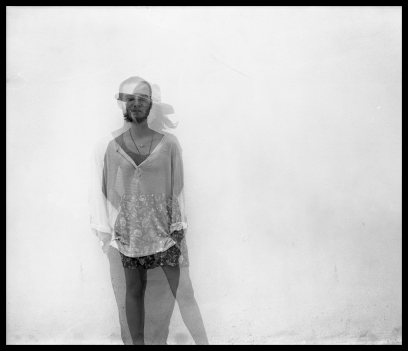 by-product certain criteria to evaluate films. But generating these criteria for photography is far more difficult for me – somehow, it feels more diverse and context-orientated than film. However, I do know what I look for when taking photographs. I realised some time ago, looking at my work retrospectively, that my works almost always explores relationships between individuals, and between individuals and their place in the world and history. That may seem so vague that it borders on the meaningless, but I understand this statement through my work. Rarely, if ever, will my photographs not have a human subject. Everything else seems lifeless to me as a practitioner.

This summarization has also played an important role in unifying my professional work with the personal. For a long time I adamantly separated the two, but through the understanding that my personal photographs were in fact traces of the relationships I held with their subjects, I bridged that gap. And placing my work under one exploration has provided the pleasure of feeling I have an identity as a photographer. Although my work manifests visually in great variety, I know what it is that im pursuing.

My most treasued photographs are – and I think, always will be – of loved ones: my family and those I’ve fallen in love with. These are the ones I’ve always kept hidden, thinking that I was the only one who would appreciate them. But now I think that, even though they are personal, people who have loved in similar ways will be able to see past the individuals themselves and recognize the photographs for what they are: allusions and tributes – at times broken hearted – to two pilars of humanity: love and memory. And well, if people don’t, they will still mean as much to me as they always have.

Is any of your work commissioned? And what are you planning next?

FR: I do sell work – sometimes extra copies of books I’ve made, sometimes darkroom prints of selected works. But so far the work that I have had comissioned has not been related to the aspirations I have as an artist, in terms of content and outcome, though they have been invaluable in other ways. But its a rite of passage and one that I accept lightly, that photographers and filmmakers have to work on what they can until they are able to make the work they truly want to and earn a living. It’s perhaps the greatest asset that university has afforded me; giving me space and time to create work that is not overly confined by a brief. As one of my final projects I’m working on co-directing and writing a short film with my brother, Thomas Riordan. The subject: the personal nature of time. The plot? I hope to discover soon enough. I’m excited to begin – my brother and I have a dynamic and affinity that I feel few people posses, complementing and understanding each other in ways that make the prospect of a collaboration an intriguing joy.

And is there anything you can tell me about your life beyond your art?

FR: Outside my life as an artist – while recognizing that photography, in particular, is very much a part of my personal life, and there is therefore little distinction to be made – I’d say my joys are quite simple. Reading, in particular Russian authors, playing guitar and most recurringly exploring Spanish culture. There are few things that I enjoy more than travelling around Spain with a companion or two – caramelising in summer and drinking wine and beer, at any time of the day, in a culture that I find as vibrant as it is reminiscent of the past. In the next year I plan on creating several bodies of work exploring rural Spain – there’s a good chance I’ll be looking into bullfighting, doing photojournalism and documentary, with a personal touch, of course. The photos I took this past summer [2018], Bou Embolat, have the inklings of an aura that I want to expand on, and hopefully this project will do that.

One thought on “Fergus Riordan: bridging the artistic gaps from behind the lens”