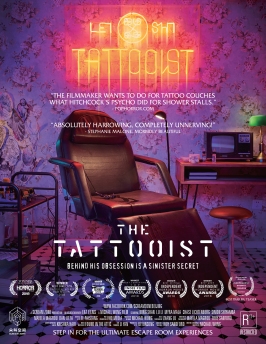 Michael Wong, the Malaysian film-maker whose debut short The Story of 90 Coins picked up a host of awards (and was reviewed on this blog!), has released his second film – and it marks quite a change of direction.

While 90 Coins was an engaging romance which ran to nine minutes, The Tattooist is a nightmarish horror film and is even shorter – much shorter in fact, at just 80 seconds!

The ‘micro-short’ is an interesting format, and The Tattooist is presented as if a trailer for a longer film – possibly a feature.

As the title implies, it is set in a tattoo parlour – an upmarket tattoo parlour, where the title character (Yanhu Wang) is seen working on a young woman customer, Platinum (Li Lu).

But suddenly we get glimpses of what is going on behind the scenes – at the back of the shop or in a cellar, people are tied and caged, cut and tortured.

Is this Platinum’s nightmare? Is it the tattooist’s fantasy? Is it real? We can make our own minds up as we watch the sinister final scene to seemingly inappropriate music, perhaps a nod

As with 90 Coins, a lot happens in a short running-time – Michael has the skill to tell a story succinctly. but without cutting corners or appearing rushed.

Michael draws on the skills and experience he gained in advertising to give his films an incredible visual appeal – whatever he’s selling, I’ll buy one (but maybe not a tattoo in this place!).

Michael is based in China, and the film (with no dialogue) has a wide international appeal. It is currently doing the rounds at the horror film festivals around the world , and has already won awards at Canada’s Bloody Horror International Film Festival, Horrorhaus Film Festival in LA, Canada’s Terror in the Bay Film Festival and at Diabolical Horror Film Festival.

You can watch The Tattooist free here and here’s a reminder of what I wrote about The Story of 90 Coins.

You may also like this post about two recent Mycho Pictures horror features and this about the haunted house horror, The Unfolding.