Of all the sci-fi and horror movies I’ve seen over the years, there’s an unlikely one that stands out among the most significant – the 1958 British B-movie, Fiend Without A Face.

No, I don’t mean Eyes Without A Face (Les Yeux Sans Visage), the controversial and stylish French surgical horror of a couple of years later. This is a less influential, but – to my mind – quite noteworthy entry in the catalogue of low-rent shockers about the dangers of nuclear power.

It’s particularly important to me because it was the first horror film I ever saw. It may not be considered a real horror film, but I saw it in my early teens in that post-News At Ten slot on ITV, when the announcer delivered the famous warning about the following film not being suitable for those of a nervous disposition. 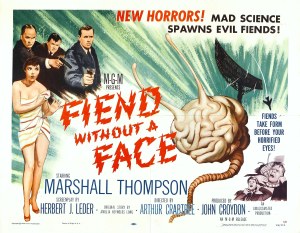 I’d never actually heard that warning before (except via the cooler kids at school), so it promised thrills! If you’ve seen Fiend, you’ll know that you would have to be of an incredibly nervous disposition to have any trouble watching this, but for me at the time, it delivered all the scares I could ask for.

Invisible monsters, known as ‘mental vampires’ suck out their victims’ brains and spinal cords. When they finally become visible as brains and spinal columns with antenae, they crawl and leap in a quite impressive stop-motion way. And when they’re shot, they ooze a gloriously revolting goo that reminded me of blackcurrant jam.

Other notable things about this film are that its star is none other than Marshall Thompson (who went on to be a childhood favourite as Daktari), and it contains the most remarkable array of attempts at a Canadian accent (as highlighted in the Dark Corners review).

It’s also sometimes genuinely tense, not least when our main characters defend a familiar domestic setting from the invading creatures – a scene which was echoed a few years later in Hitchock’s The Birds.

It’s not a great film. It’s barely even a good film. But it’s a lot of fun most of the time, and – even viewed now – is actually quite scary for some of the time.

You can watch the original trailer here, and the full film here.

3 thoughts on “Faceless fiend sucks out your brain!”