Who was the first movie Batman? Most will remember that TV’s Adam West starred in a jokey big-screen spin-off in 1966, which pre-dated the darker Tim Burton version by a couple of decades.

But you need to go back 20-plus years before West for the original. Lewis Wilson is the name to earn you the points here – he played the Caped Crusader in a 15-part serial back in 1943. This being war time, the villain was a Japanese criminal mastermind, Dr Daka (or in some episodes Prince Daka), played by J Carrol Naish.

As was the case with most serials, budgets were tighter than the hero’s tights – don’t expect a Christopher Nolan spectacle here – and the plot, especially the resolution of some of the end-of-episode cliffhangers, will have you chuckling at times.

Sadly, there’s no 1940s Batmobile, but there is a spooky “Bat’s Cave” – and Daka has a pit of crocodiles to dispose of his enemies. So that’s all good. 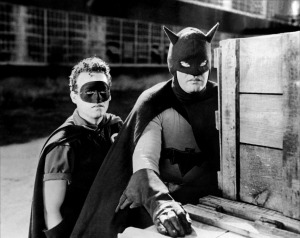 Six years later, there was a follow-up, Batman and Robin, with Robert Lowery in the lead role. This time, the dynamic duo face The Wizard, who has developed a device to remotely control vehicles.

Again, it’s lots of low-budget fun – worth a look if, like me, you enjoy this sort of thing, or if you want to bore your friends with your movie trivia knowledge.