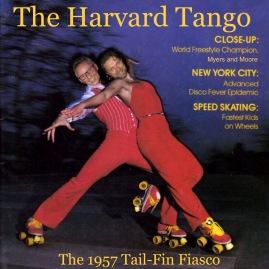 I was first drawn to Essex pop-rock band The 1957 Tail Fin Fiasco, not just by their wonderful name, but by their Steely Dan-ish music, with influences from other ’70s bands, which many people of my age enjoy.

So I was very pleased to hear they have a new album, The Harvard Tango, now available to download for a mere £5.

It was long ago in 2013, when I first spoke to the band via email for a blog post, and all these years later (I write this during the UK’s covid-19 lockdown in April 2020) interviewing them is still a curious experience: somewhat surreal and often with reference to various legal proceedings!

I’ve been in touch with ‘the guys’ (as I like to call them) over the past few years, partly based on our support for rival low-level English soccer teams, Dagenham and Redbridge (them) and mighty Torquay United (me), but I’m still not 100% sure who’s in the band.

They’ve been quite mysterious about the line-up, I suggest. I know there’s Mal and David. Are there another band members?

TFF: There’s no mystery.  It’s just that in the past we’ve run into problems because global industry companies have accused us of trading off their brand names, so we’ve learned not to bandy ours around.  On record, it’s just us.  When we play live we’re joined by Paolo Evian on drums and Patrice Volvic on guitar.

Anyway, a straightforward question: when did they record the new album?

TFF: Some of the songs have been written for a while, but we’ve had a couple of false starts recording them. Then, the coronavirus lockdown happened and as we weren’t allowed out of the bunker anyway we just went for it, recording as much and as quickly as possible; some new songs came along and it all happened really fast.  So, very recently.  In the last month.  That’s one of the great things about music sales sites like Bandcamp – our record is available there – you don’t have a record label holding on to the tapes for six months discussing wardrobe and fonts before they’ll release an album. As soon as you think you’ve got a record, you can put it out there and see if you were right.

Apart from the obvious Steely Dan influence, the new album also at times reminds me of 10cc, Billy Joel, Squeeze, even a bit of Status Quo (and I mean that in a nice way). I wondered if they mind people making those comparisons? Do they set out to pay tribute to certain bands or artists? Is it just music they love filtering through?

TFF: We don’t mind those comparisons at all!  We just try to make records that sound like a band we’d want to go and see – and we’d love to go and see the bands you’ve mentioned.  Hopefully our combination of those kinds of influences, the subjects we’re singing about and our technical deficiencies blend into something a little bit original.

The first single from the album, Dream Pharma, is about the death penalty in the US – a disturbing subject, which contrasts with the driving, pop-rock music (reminded me of Squeeze). Is this an issue they feel particularly strongly about, I wondered? And how do they feel about social issues as a topic for songs, rather than the usual love and romance? Very few of their songs seem to be conventional love songs. Or conventional at all!

TFF: Love and romance are social issues, sometimes leading to restraining orders, we’ve found.  Despite the years of post-Sedaka therapy we still find it very upsetting to get in touch with our emotions, so most of our songs are stories about characters and situations other than our own.  Dream Pharma is about a UK driving school that found itself embroiled in the US capital punishment industry.  A true, complex and nuanced story laced with the tragedy of wasted human potential that we felt naturally suited a pub-rock shuffle.

Of course it is. And I feel a fool for not picking up on those well-worn themes. But what is the track Dirk is not a Bogey about?

TFF: Dirk is a pilot.  He’s in love from afar with Evie, the wife of local park-keeper, municipal groundsman and lothario, Adam.  To impress Evie and intimidate his nemesis, Dirk performs low-level fly-pasts over the park in his Tornado.  A tale as old as time.

Indeed so. And did I  detect a reference to Good Neighbor Sam in Queen of the Hollywood Extras? Is that the fairly obscure Jack Lemmon comedy from the ’60s? I didn’t think anyone else remembered it!

TFF: You did, and it is.  There are lots of old Hollywood film references in that song.  Our titular heroine is Bess Flowers who appeared un-credited as an extra in hundreds of films.  Hitchcock was apparently loathe to make a film if she wasn’t in it, somewhere … she was his lucky charm.  That song is our tribute to the great people in the entertainment industry who are content to be in the shadows, un-seen and unrecognised in their pursuit of artistic excellence, and is in no way self-referential.

How wonderful! I love Hitchcock and old movies generally, so how did I not know about Bess? This has been educational for me. You see, hanging out with these cool kids really is worthwhile.

Here’s the track listing for album:

1. The Harvard Tango
2. A Yard of Pace
3. Take Me To Rutterford
4. 39 Grams
5. Bros. Fairchild & Marylebone
6. Dirk is not a Bogey
7. Monogamy Pews
8. Dream Pharma [the lead single]
9. Queen of the Hollywood Extras
10. Diving In Columbia (Harvard Tango Lament)
Don’t forget you can buy the album The Harvard Tango for £5 at Bandcamp here.

Involved in arts and entertainment? Check out the services of Weltch Media.

2 thoughts on “Doing The Harvard Tango with Mal and David (and Dirk, Evie, and Bess)”