As British indie horror company Mycho Entertainment prepares to unleash two new feature films, I spoke to Professor Mycho himself, MJ Dixon, about Bannister DollHouse and CleaverS: KIller Clowns, as well as the films that went before them and those to come.

I was an associate producer on Mycho’s Slasher House 2 (2016) and am helping publicise these forthcoming features, but I realised I didn’t know much about the studio’s origins. Time for a catch-up with MJ.

How did Mycho Entertainment come about?

MJ: Mycho started as label for short films I was producing back in 2004. I had just left my home town to pursue my career as a filmmaker and I wanted a fresh start. I didn’t really think about it too much at the time, it was just a name to produce my short stuff under, but after a couple of years I’d produced so much short stuff that the phrase ‘Mychoverse’ started to stick. 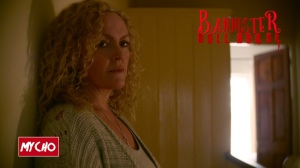 In 2005 I wrote a Feature called Slasher House, the idea was a sort of House of Frankenstein with modern day slashers. It was designed to be the crossover point for a series of ‘bottom shelf’ horror films that were all secretly linked, but I got a little ahead of myself and started writing that first.

Because I couldn’t use any of the big guys (Freddy, Myers etc) I decided to take the archetypes that the Slasher sub-genre had developed over the previous 25 years and make some of my own. Which was fairly easy as I’d been making horror movies since I was a teenager, so I drew a lot from characters I’d already created for short stuff. I decided instead to make Slasher House a springboard for the characters, a series of teasers for horror characters that I wanted to develop more.

The script sat on the shelf for five years. It was after my first feature that I was told post [production] was going to take about 18 months, I didn’t want to wait that long to make another movie, so I started digging around through my old stuff and came across the Slasher House script and a rough sketch for the Mychoverse timeline and decided to give a shot. That kickstarted the Mychoverse as it is today, now eight films deep.

So your films all link together, and Bannister DollHouse is a prequel for Slasher House 2, but it looks to be a departure in tone – more supernatural, less slasher. Is this a new direction for you? And, if so, what are the inspirations for this?

MJ: With every film we try to bring something new to the table. The beauty of horror is that it can be a great foundation to work in almost any genre. We’ve done action, psychological thriller, sci-fi, martial arts, but all using the tropes of Slasher movies as a foundation, and every time we try something different.

Bannister DollHouse is our haunted house movie, taking cues from films like Amityville Horror. Also it’s a family melodrama which is an odd genre to try and mix with horror, I know, but it worked for the story we wanted to tell and, of course, it means that we get to try something new, which is an important part of growing as filmmakers.

I took a lot of inspiration from ’60s and ’70s movies like Rosemary’s Baby, The Omen, Don’t Look Now, but also films like Psycho and Whatever Happened to Baby Jane? I wanted to make a film that showed the horrors that the Bannister family were going through rather than something like Child’s Play – like the true horror is this family falling apart and the supernatural stuff is more like an overlooking presence, that certainly rings true for the first half of the film before we head into familiar waters, but there’s a good reason for all that.

One of the characteristics of your films is that you seem to have an emphasis on strong female lead characters. Can you explain how and why that came about?

MJ: To me, the horror genre and strong female characters had always gone hand in hand. There has been a lot of criticism of the horror genre for the way that it ‘degrades’ women, and I think the absolute opposite is true. This is a genre that created the ‘Final Girl’ and I think it was more important than anyone realised at the time.

When I wrote Slasher House, Buffy was off the air, and it felt to me like there was a void of that kind of character in mainstream culture. We had the X-Men movies and they completely sidelined the female characters from moment one. I grew up reading comic books and one thing I loved were strong female characters like Rogue, Storm and Phoenix, I felt like they got an unfair representation in the movies, and I wanted to address that in my work.

I decided that in a universe of Slasher villains, it made sense that the protagonists were ‘Final Girls’, that was the basis for writing Red and that carried over to our other films. I was conscious to make sure that I wasn’t just representing the kick ass women either, to me I wanted to ensure that these characters were well-rounded, with flaws and fears – they make the wrong choices, they aren’t just the love interest or the girlfriend, but they can also be those things.

You’ve told me a bit about Bannister DollHouse, but you’ve also got CleaverS coming soon. How different are they?

MJ: One is a haunted house drama and the other is a killer clown road movie, so they really couldn’t be further apart in terms of style and tone, but they do share a common thread, which is their relationship with family or more specifically parenthood. That’s been a running theme throughout our Stage 2 movies so far with Slasher House 2 and Mask of Thorn and it continues here.

Bannister DollHouse really is a more subtle examination of the Bannister family and their unspoken battle with this demonic entity. It’s about how it has torn this family apart and how Mary, the mother (Susan Lee Burton) is trying to hold it together after the death of her eldest daughter, seemingly at the hands of her husband. There’s lots of emotional drama in there, but we made sure that we didn’t skimp on the kind of horror frights that you’d expect in this type of movie.

CleaverS : Killer Clowns wears its themes a little more on its sleeve, with The juxtaposition of the all-American Harvey family and their strained relationships vs Cleaver and his relationship with his daughter, which seems to be a balanced, if murderous one. CleaverS is a little more in our face with its whole message as well as the blood and guts. It’s more of a ‘fun day out’ kind of movie.

Just going back to the origins of Mycho, did you always have a vision to create this kind of united collection within its own universe? Where do you see it heading, and what can we expect next?

MJ: The shared universe idea came first, when I was trying to write a series of novels in my early 20s, after a 100 pages or so, the laptop I was using suddenly disappeared as it had been on loan from a family friend (back when laptops were a luxury). After that I couldn’t face the idea of redoing all that work.

My main interest had always been in film though and so it wasn’t long before I started seeing if it could work in that medium. This was, of course, way before the word Mycho and the label even came into existence.

People thought I was crazy when I would pitch it, but then in 2009 as it became evident that Marvel were going to do it that gave me a bit more slack and by the time Avengers came out in 2012 I already had our whole thing mapped out and suddenly everyone was open to the idea of a shared universe of films. That’s helped a lot.

As to where I see it heading? We have a couple of new projects. One based on character from Slasher House 2 – that’s our next film. Then I think the plan is do something different, still set in the Universe, but its not a sequel and not a character or characters that we’ve seen before. It’s pretty cool and unique and something that we’ve been planning to do for years but never found the right time.

As for the long term? Well, those books that I was writing in my early 20s, that’s the endgame, a lot of the characters in the Mychoverse are drawn from that. Not as a book but as something bigger and it’s so exciting to think about finally reaching that point. What’s been great about writing Mycho movies is that I know where it leads, I can drop hints and set things up before we hit our endgame.

Currently there are 16 films planned in the overall story. We just finished films seven and eight this year so we’re now halfway there and then the plan is go out with a bang!

Your films are well-supported on crowdfunding sites, which must show you’re pleasing your audience?

MJ: The amount of support they’ve received has been amazing though and obviously, we just couldn’t make the films without them. We’re very grateful to everyone who helps us get these films off the ground.

Check out the latest news from Mycho Entertainment here.