We’ve all heard the cliche about that “difficult second album”. Imagine how the challenges are multiplied with that difficult second jazz festival. Yet, Love Supreme II was again supreme.

The inaugural Love Supreme Festival in July 2013 was such a success, I gave it a glowing 10 out of 10. It was the UK’s first major greenfield jazz festival for many years; it boasted a stellar line-up, a beautiful location, and glorious weather. How could the 2014 follow-up match that?

Well, somehow it did. The location was the same – stunning Glynde Place in East Sussex; the weather was okay (at least most of the rain held off, and the sun came out); the line-up again boasted many of the expected big names, a nice selection of lesser-known acts, and  a few surprising additions too.

All in all, it was another triumph for the organisers and the hosts, Jazz FM. With the biggest acts (mostly) on the main stage, there were also major venues in the Ronnie Scott’s Big Top, and the Arena tent, as well as smaller stages. Over the two days, I managed to take in: Jamie Cullum, Gregory Porter, Snarky Puppy, Incognito, Soul II Soul, Courtney Pine, Laura Mvula, Cecelia Stalin, Omar, Natalie Williams, Curtis Stigers, James Torme, Nikki Yanofsky, Imelda May, Alice Russell, Jose James, and Al Mckay’s All Stars (as the Earth, Wind & Fire Experience). 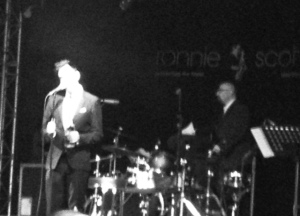 The atmosphere was again ultra-relaxed, as was the definition of “jazz” – soul and funk (jazz’s legitimare offspring?) were rightly well in evidence. The hip-hop of Sunday headliners De La Soul is perhaps a more distant relative, and Imelda May’s rockabilly set was fun, but seemed a little out of place.

Not as out of place as Gregory Porter, though – arguably the hottest property on the jazz scene this year, he performed in the Ronnie Scott’s Big Top, rather than the main stage. The predictable surge to the far end of the site led to one side of the marquee being removed to enable more people to see the great man in action.

These are minor quibbles, though. It was a wonderful weekend, and plans are already afoot for Love Supreme III. July 3-5 are the dates for your 2015 diary, and you can save money with these (very) early bird ticket deals, until July 20 (2014).